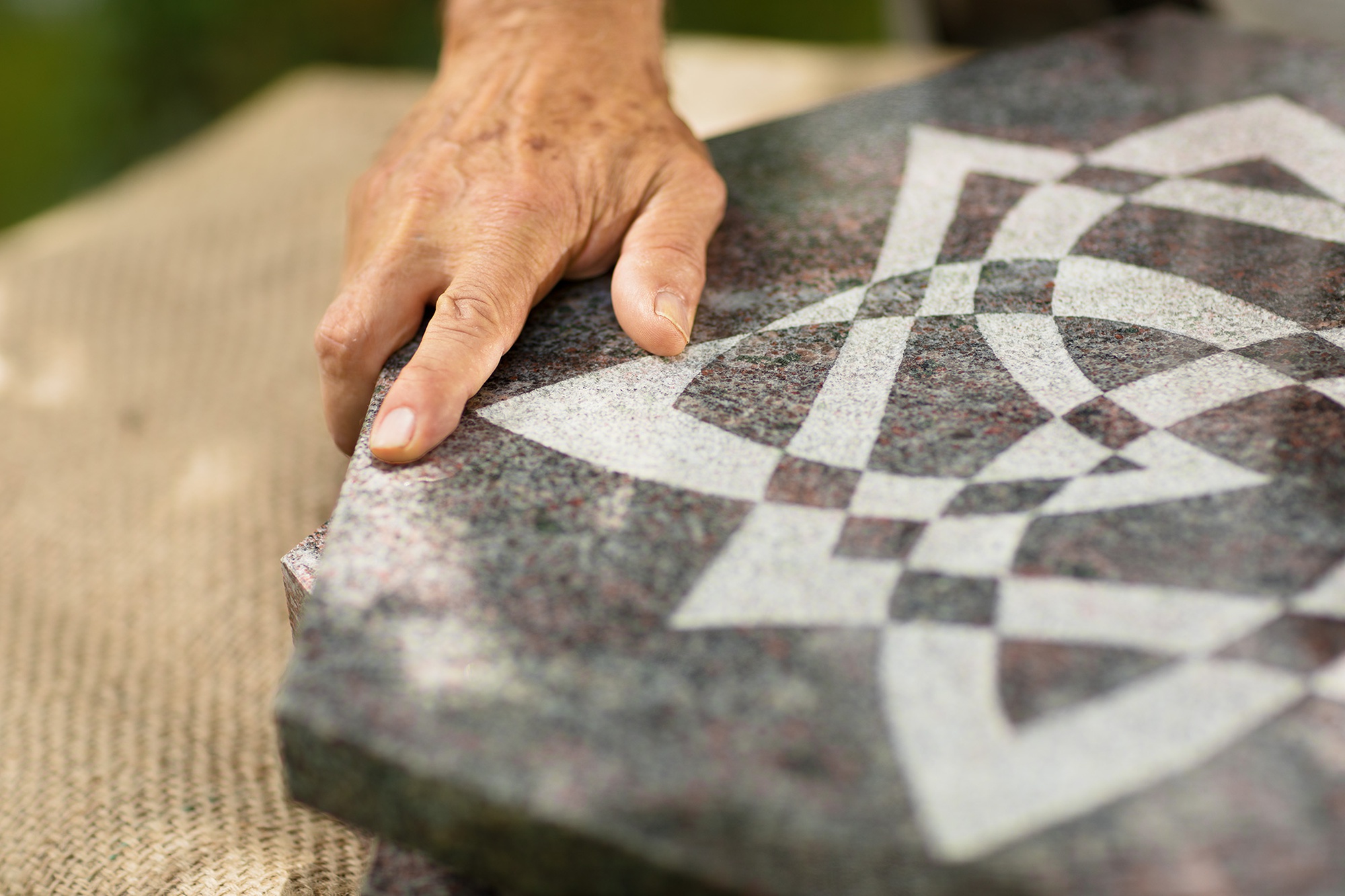 The projects of the five selected artists are part of two exhibitions, The Wonderfulness of Memory, which inaugurates Cukrarna Gallery as a new space for contemporary art after several years of renovation work, and which also forms the independent Semi-Permanent Exhibition. It is named after its duration, as the works will be on view even after the end of the inaugural exhibition.

Lia Perjovschi, Marko Pogačnik, Tobias Putrih, Miha Štrukelj and Andrej Štular have conceived their works as in situ projects specially adapted to the spaces of Cukrarna Gallery. In the basement we find the wall drawing by Miha Štrukelj and one of the five cosmograms by Marko Pogačnik; the others are on the ground floor, the mezzanine and in the offices. On the mezzanine floor, where a library will be set up, the work dedicated to the four main representatives of Slovenian modernism by Andrej Štular can be seen, mind maps by Lia Perjovschi and furniture by Tobias Putrih, whose benches are placed in the exhibition spaces and the foyer.

All the projects in the Semi-Permanent Exhibition are intended to connect the institution with its visitors – some establish communication on a spiritual level, others are perhaps more educational or practical in nature – and are meant as an extension of the artists' involvement in establishing Cukrarna Gallery. Last but not least, visitors to Cukrarna Gallery can also enjoy art at times when no other exhibitions or events are taking place.

Lia Perjovschi’ s diagrams are conceptual drawings that reflect her personal thought patterns, which the artist uses to outline her dynamic reading process. By reading miscellaneous professional literature, fiction books, watching films, listening to music and reviewing other documents of cultural value from the past, the artist creates "knowledge spheres" from which derivations and comments, sentences and statements, information and facts radiate like sunbeams. Occasionally, these graphic thought patterns can also be based on a number, a blank space, or a question mark. By connecting the past with her reflections, the artist not only draws attention to the need for constant critical observation of reality but also opens up other possible mental connections and views of the past and present. It would be pointless to search for logical patterns as the charm of her thought patterns lies precisely in their seemingly unrelated and temporally unfixed sequences of written thoughts. The diagrams thus create a tapestry of lines, words, and characters in surprising dynamic patterns.

Lia Perjovschi is the founder and coordinator of the Contemporary Art Archive and Center for Art Analysis and the Knowledge Museum. The artist believes that we are currently living in the "post-production age" of bulimia, oversaturated with things, and thus we need to look at texts, images, and objects from a different perspective and reuse them. 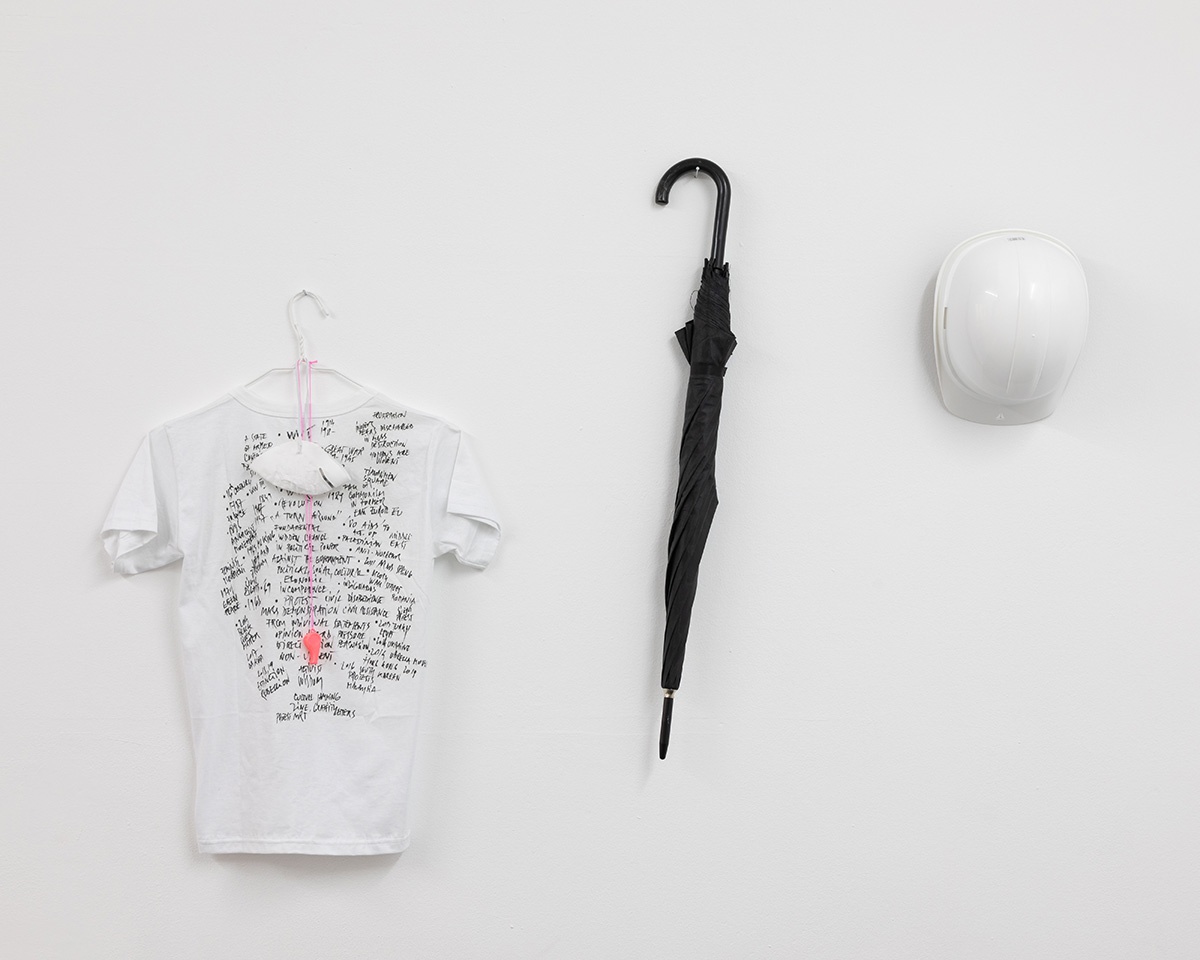 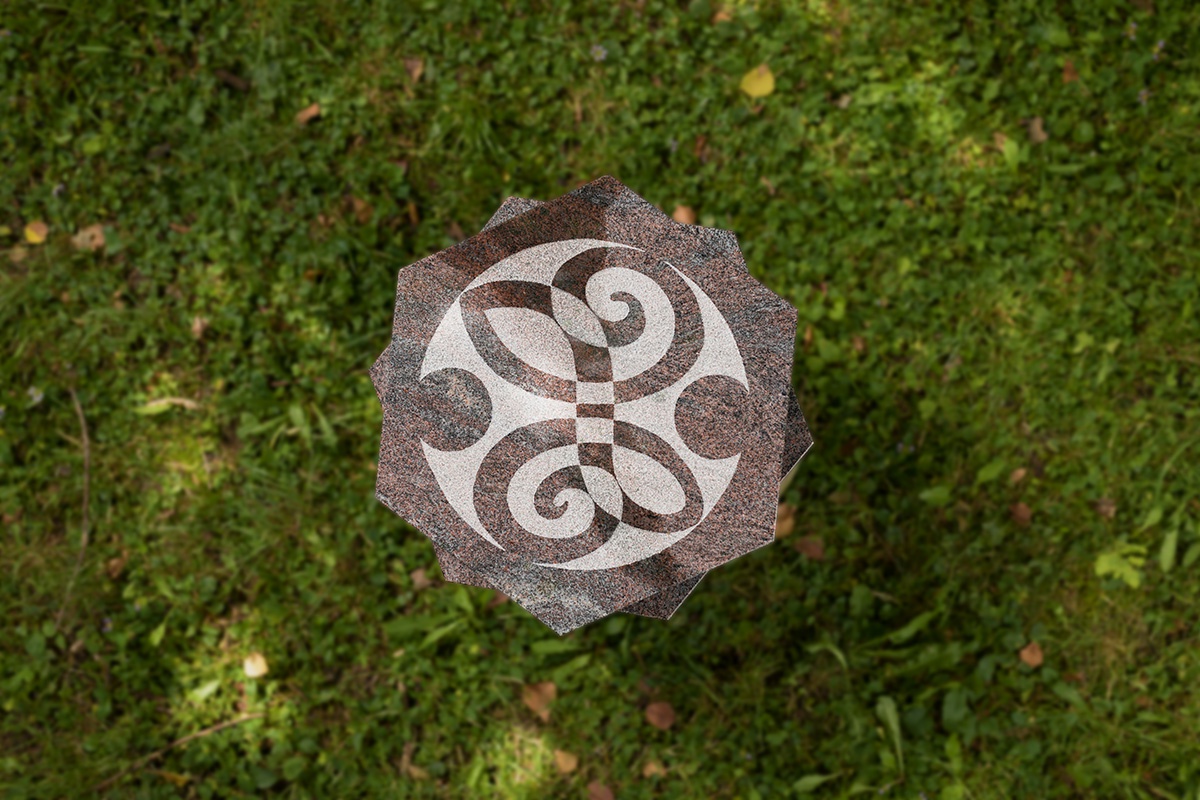 Marko Pogačnik, co-founder of the OHO Group and founder of the agricultural-artistic commune Družina (Family) in Šempas, has developed three basic guidelines for art that co-shapes life on our planet. In addition to cosmograms, there is also geomancy – a method of discovering space also in its invisible dimensions – and lithopuncture, a type of earth acupuncture where stone pillars are used to stimulate the flow of earth energy.

While visiting the Cukrarna site, Pogačnik discovered that the renovated building needed an intervention that would help it to function in the best possible way. To this end, he chose cosmograms, which are characteristic of the last 40 years of his work, as the medium for communication with the environment. Part of the creation of a universal language, cosmograms are "living letters" or encoded messages that channel energy through their images. For their implementation, he chose hexagonal plates made of different types of granite and he engraved the corresponding cosmogram onto their polished surfaces. Each cosmogram is designed differently depending on what needs to be communicated to the space. Cosmograms in the central space of Cukrarna regulate the disproportionately strong influence of the cosmic element of air, as the architectural elements of the space with its floating galleries, according to the author, have no contact with the Earth. Cosmograms in the basement space strengthen the element of water, as the basement lacks this element due to drainage and insulation despite its location at the level of the river Ljubljanica and even below the riverbed. Pogačnik also carved two cosmogram which evoke certain prototypes of the artistic creative process in the space.

Tobias Putrih's work Walkingstick is based on Autoprogettazione, conceived in 1968 by Italian industrial designer Enzo Mari. Mari’s project is actually a proposal; in his vision of design, anyone can be a designer and a creator. However, only those who are opening up new possibilities and revealing the processes that everyone can follow to create their own version of a product can be called professional designers.

Following the analysis of Mari’s plans, Putrih designed the equipment for the Cukrarna library (shelves, tables, and chairs). He transformed part of roof beams of the old building into functional equipment (benches and chairs) for the exhibition areas. Walkingstick embodies the fascination with extremely sophisticated and bold upheaval in the search for synergy between architecture and its elements and the users of these structures, which has encouraged artists since the 1920s to seek a balance between ideology, appearance, and usability.

Tobias Putrih, seeking inspiration in the findings and the design and architectural solutions of the last century, intertwines elements of sculpture, design, architecture, and science in his projects. He places his works in public spaces such as galleries, libraries, and cinemas, creating temporary environments from ordinary, industrial, or intangible materials. 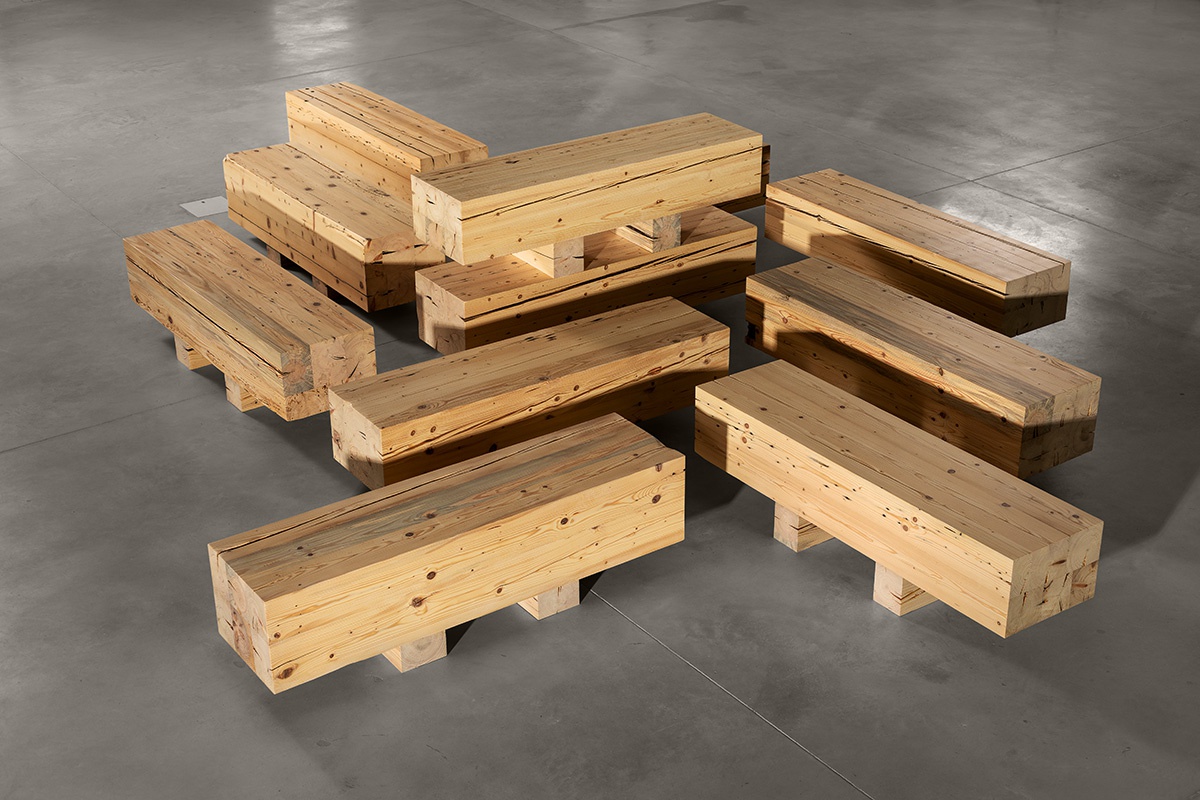 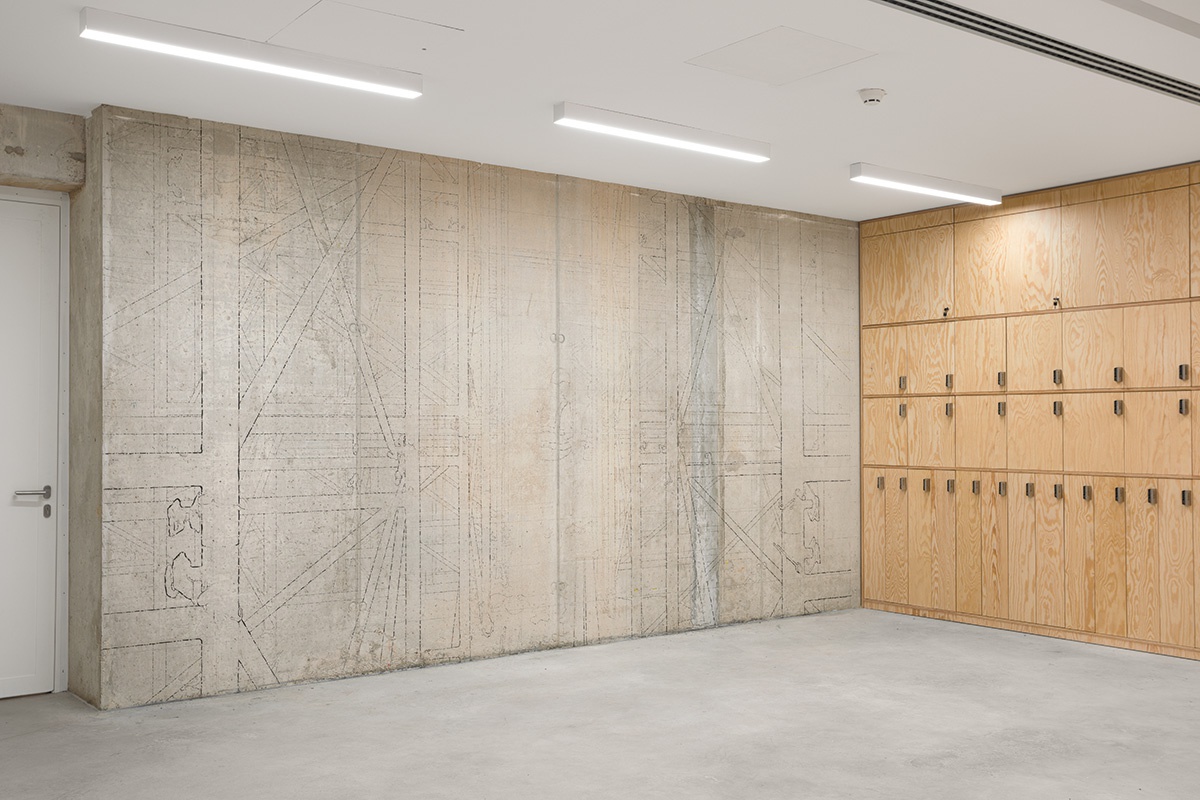 Miha Štrukelj's practice is based on photographic images, which he uses to question what is visible to the eye. Štrukelj uses his own photographic images of the Cukrarna construction site – the building envelope, metal poles that support the scaffolding, and the still fragile horizontals of the building's unfinished insides – as a template for a wall drawing. The drawing in the basement of the Cukrarna building is defined by the material nature of the base itself: the rough, grey concrete, its cracks and imperfections. Štrukelj’s blurred photographic image internalises the material characteristics of the wall and adopts them as its own raster. The motif, used to convey the view on the opposite side of the same space, was created during the renovation. Štrukelj's wall drawing is complemented by a series of drawings on paper, which are also based on photographs of the Cukrarna construction site and can be read as a series of visual episodes from this unfinished project.

Miha Štrukelj’s practice spans the fields of painting and drawing. In recent years, his focus has been on site specific installations – on the creation of fictional, utopian urban landscapes from recognisable elements of real landscapes. He creates visual stories, which mainly depict neglected, emptied or less interesting parts of cities whose constructions attract the artist due to their linear elements and geometric forms.

The work of illustrator, comic artist, painter, puppet designer, and scenographer Andrej Štular is a homage to Slovenian modernism. Its main representatives, Dragotin Kette, Ivan Canka, Oton Župančič, and Josip Murn, were residents and guests of Cukrarna, and their work was strongly influenced by the living conditions there. Štular takes advantage of the length of the hallway which overlooks the Ljubljanica River. He decorates it with found debris and complements them with statements by the above four authors and quotations from their works, which meander around wooden branches.

Štular’s affection for the ready made object, along with the practice of moving and combining it in order to create a new work, is even more evident on the left wall, where the artist confronts us with one-kilogram packets of sugar, cups of tea and coffee, and a model of Cukrarna made of sugar cubes. The common denominator of the collected material is a journey into the world of everyday objects that mark either the commodified material nature of the original building or allude to the literary quartet (four kilos of sugar, four cups of tea and coffee) and contain references to their works, such as A Cup of Coffee from 1910, which is among the best known sketch stories by Ivan Cankar. 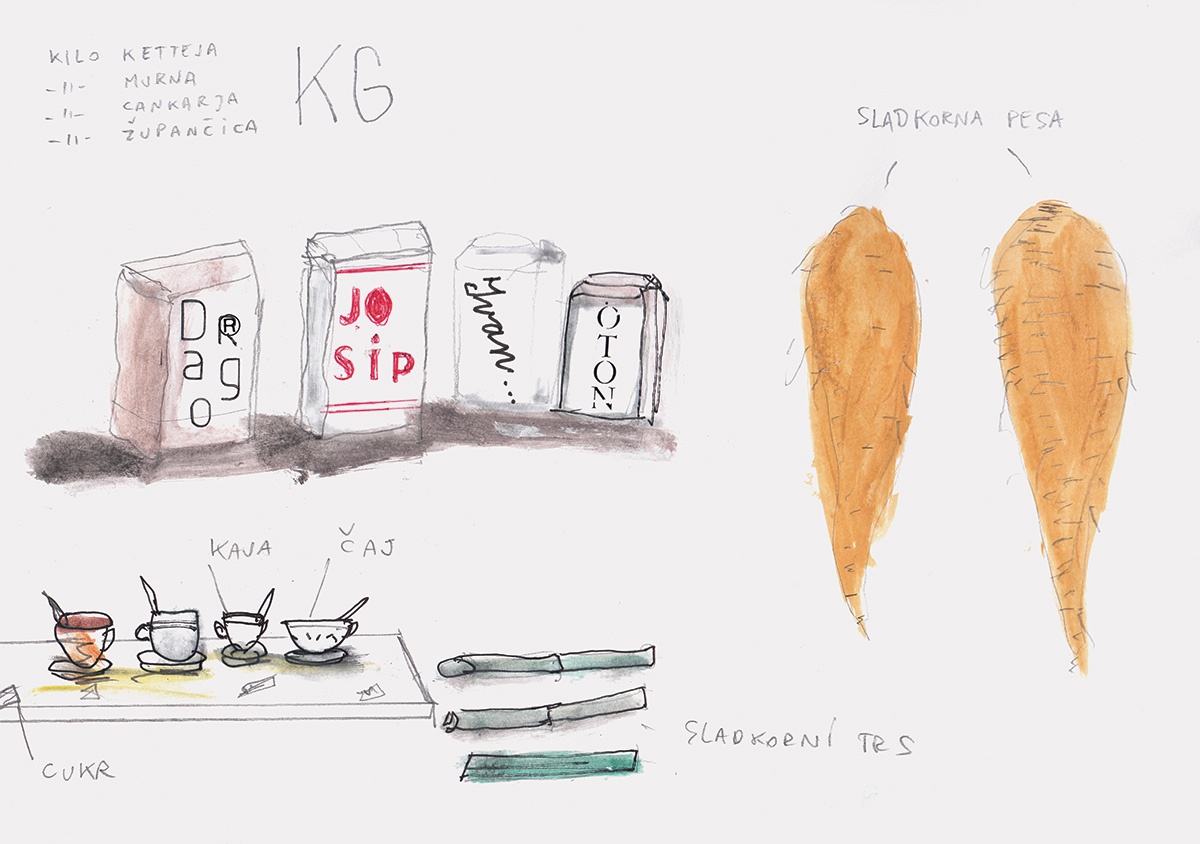