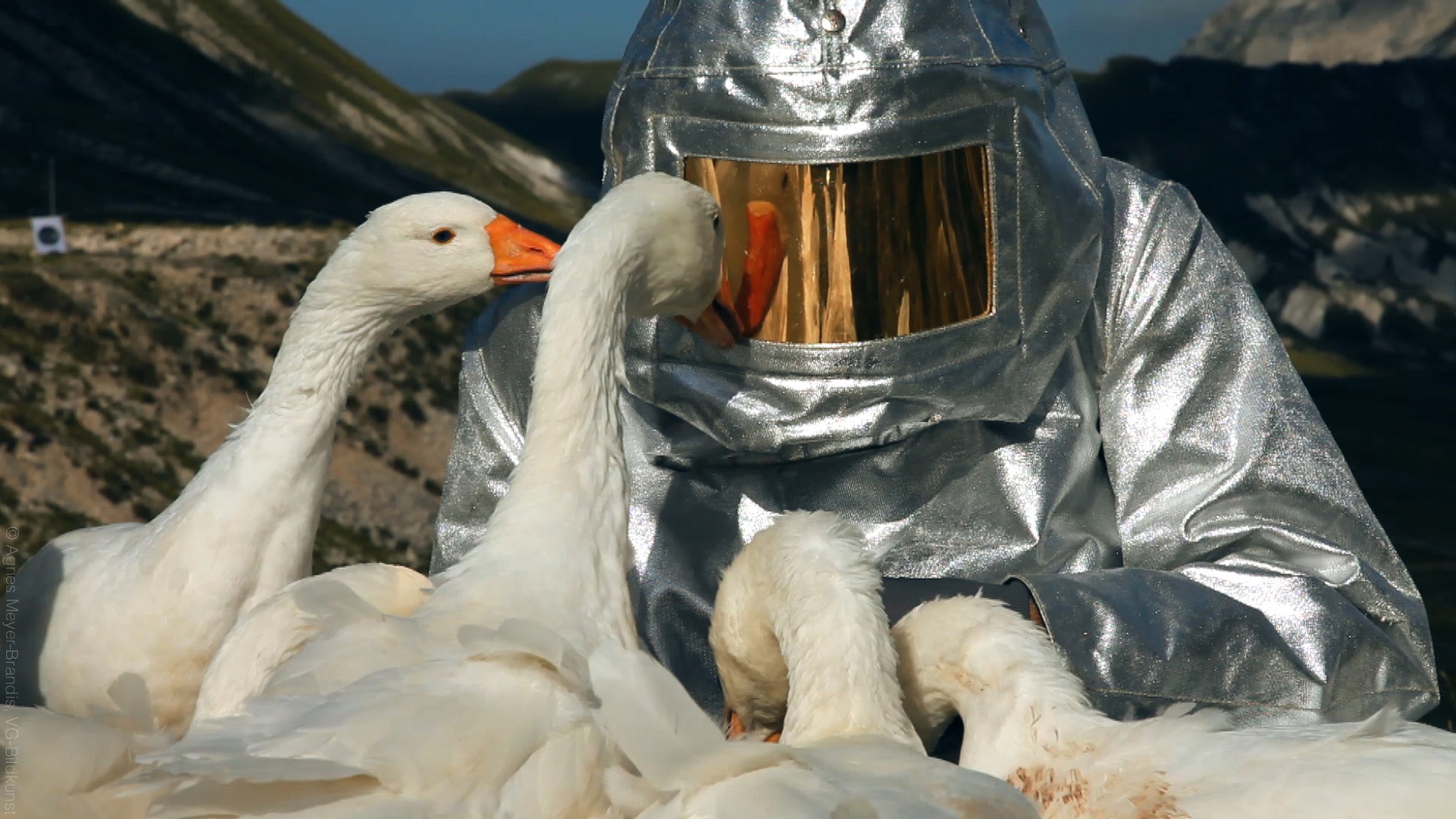 The ResearchRaft – Institute for Art and Subjective Science has been at the heart of Agnes Meyer-Brandis’s artistic practice ever since it was conceived in 2003 as a means of linking her many and varied projects, ranging from the geological depths to outer space. She has developed a number of tools that allow us to observe and explore invisible worlds, be they beneath our feet, the surface of the Earth or spaces with zero gravity, thereby activating our sensory apparatus and acting as interfaces that allow us to understand the data generated by our interactions with our environment. Since 2013 her research has focused on trees, their migration and communication.

The Lunar Migration Bird Facility (2008-ongoing) research project was inspired by the utopian book The Man in the Moone, written in 1638 by the English bishop, historian and author, Francis Godwin. It is considered one of the first works of science fiction. The protagonist, the Spanish adventurer Domingo Gonsales, harnesses migratory birds together to create a flying machine and is then carried by them on their annual migration from the Earth to the Moon.

The installation at the Parterre Gallery brings together two offshoots of the Lunar Migration Bird Facility project: Moon Goose Colony movie (2012) and the Hall of Fame (2012/2022). Both combine art with science, exploring different levels of reality and creating gateways into imaginary worlds that the viewer is able to temporarily inhabit. Moon Goose Colony is a long-term biopoetic performance in which the author teams up with eleven moon geese hatched in an incubator at organic farm and research organisation in Abruzzo to breed her own flock of animal astronauts, using an imprinting process based on the methods of the Austrian ethologist and ornithologist, Konrad Lorenz.

The geese – whose names are Neil, Svetlana, Gonsales, Buzz, Kaguya-Anousheh, Irina, Valentina, Friede, Yuri, Rakesh and Konstantin-Hermann – were not only taught how to fly in formation but were also given lectures on a wide range of relevant subjects: lunar re-entry trajectories, the problem of space debris, flight training in a variety of circumstances, and the use of gadgets such as a mobile moon or a large model of the letter V. After their nine-month induction course, the geese were ready for the next stage of intensive training for their mission to the moon. This entailed living in an environment that simulates the surface of the moon, and both the original eleven geese and their descendants are still living there today. The artist has preserved the original eggshells and feathers of the eleven avian astronauts and has hung their portraits in the Hall of Fame photo gallery, accessed via a long carpet through a passageway that has been adapted to the architecture of Cukrarna.

By combining elements of research, experimentation, performance and installation, Agnes Meyer-Brandis starts with something real and then moves us into new dimensions, thereby enabling us to enter into the narrative of the project, be that gravity, or the impact of the moon on humans and animals, the history of sending animals into space, or landing on the moon and searching for habitable planets. The introduction of poetic, humorous and often absurd elements takes us beyond reality into the realm of the imagination, and to questions about the limits of what is possible and the nature of our potential future.

The Moon Goose Analogue: Lunar Migration Bird Facility by Agnes Meyer-Brandis was commissioned by The Arts Catalyst and FACT, in partnership with Pollinaria.