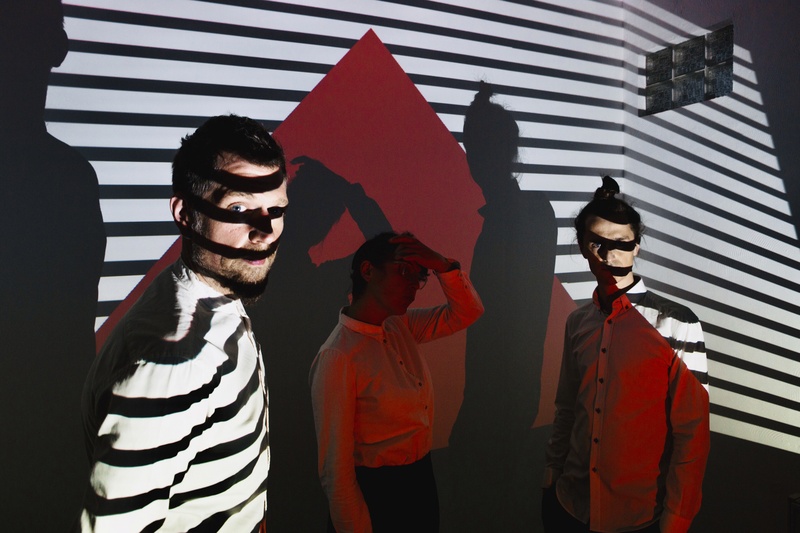 The idea of musical elasticity is central to Rhizome, the sophomore album of the Slovenianaudio-visual electronic jazz trio Etceteral, the newest member of the Glitterbeat family, who debuted in 2020 with the album Ama Gi for Kapa Records. Following a series of domestic and international gigs, the band consisting of Boštjan Simon (saxophone, synth, electronics), MarekFakuč (drums), and Lina Rica (visuals) returned to the studio, taking their ambition to meld audio and visuals to a whole new level on their debut for the tak:til imprint.

On Rhizome, the band explores the interzone between groove-driven contemporary jazz, quantized electronic music, abstract modular explorations, and free improvisation. Like rubber that is able to stretch and be returned to its original shape, Etceteral expands its arrangements tothe point of no return, pushing its sonic architecture to the maximum without ever letting it collapse onto itself. "I like to think in terms of sonic rubber bands. We can stretch our music both rhythmically and harmonically, change tonality and return to the main theme through a different key. This process opens up new space for discovery. We recently listened a lot to Joshua Abrams and Evan Parker, musicians who know how to make their music airy and spacious," says Simon.

Given carte blanche to self-produce their second album, they centered it around the concept of rhizome – a continuously growing horizontal underground stem that puts out lateral shoots and adventitious roots at intervals, or in Deleuze and Guattari’s terms, "a nonlinear network that connects any point to any other point". "A rhizome can virtually take any form, choose its path on the go. Just like with our music, its representation isn’t based on an ideal form. The album is like an inquiry on where we are currently situated and where we are going," says Simon.

The sophisticated songs of Rhizome are interconnected in their structures, growing from the inside out. With its interlocking synth sequence, saxophone ornaments, and hip-shaking syncopations, the opening earworm Meadow Sage sets the pace of the record, boasting an ambitious and adventurous sonic character. "While the first record reminded me of Morphine, the new one reminds me of Chick Corea,” says Rica with a grin.

New songs took shape organically through jams, the only exceptions being the intermezzo Ton618, a nod to exploratory modular techno, and the IDM-inspired coda Idler Idol, both arranged as links between adjacent songs. "We had a list of things we wanted to do on the new album. We gradually implemented our ideas, creating a sort of puzzle," says Simon.

The interplay between synth sequences, the kick drum, and the saxophone represents the foundation of Etceteral’s sonic realm. Their sound palette consists of the iconic synth Dave Smith Evolver, a saxophone with aMIDI controller, sound effects, and drums. "My synth offers a lot of options to play with parameters, and I also use my saxophone to control various effects, trigger envelopes, and pre-programmed sequences. The same is true of Marek’s kick drum," says Simon. Etceteral’s idea of musicality stems from the deviations and imperfections which are a result of this loosened approach. It is not as much about the default properties of certain machines as it is about what a musician can get out of them – almost like an exorcism of an imprisoned sonic demon. "If you subordinate to the machine, everything becomes too angular. We wanted to keep things open," says Simon.

There is always a more or less straightforward sequence helping Fakuč to lock into a groove without relying on a metronome. "The Polish avant-garde jazz trumpeter Tomasz Stańko explored this on his stunning album Fish Face already in 1973," says Simon. "Our premise is the same. You have a certain sequence to which you can improvise rather freely," he adds. In Pygmy traditions, one of the band’s reference points, every singer or musician follows a single theme or rhythm which is then unified into polyphony or polyrhythmic patterns. "You start with a single element, and then things start to grow outwards, which is way more exciting than having static structures," says Simon.

Etceteral build their sonic architecture from inside out, never fully defining the outlines of their songs. Even though their sequences are quantized, Fakuč only rarely uses click tracks, rather opting for a more instinctive approach to electroacoustic fusionism, which results in a spontaneous flow and jazzy vibe. "People who play jazz probably wouldn’t consider it jazz, while electronic producers would probably categorize it as such," heads tongue in cheek. The new visuals were designed during the recording process using three different direct audio outputs. Rica would project her visuals in the rehearsal room while Simon and Fakuč were improvising, creating a virtual space between musicians and images. "When I look at visuals, I become dizzy, looking for a potential creative loop where images influence the music-making process, and vice versa," says Simon. Rica’s visuals direct the viewer’s gaze, simulating a state of trance. "It’s about a multisensory ride through the synergy of images and sound," says Rica, whose visual language is based on geometric and biomorphic abstraction, graphism, and constructivism. "The process of animation is more complex and subtle than before, the real-time generative animations are responding to three different audio inputs (snare, synth, and sax)without any latency. The visuals are more colorful now and it’s altogether more saturated and a bit more psychedelic than on our first project Ama-gi. The abstract images in motion take various associative forms open for different readings," concludes Rica